In 2012 I found an interesting article on Twitter: How the US Ruling Class Elite Beat the Bell Curve. I ReTweeted in innumerable times. 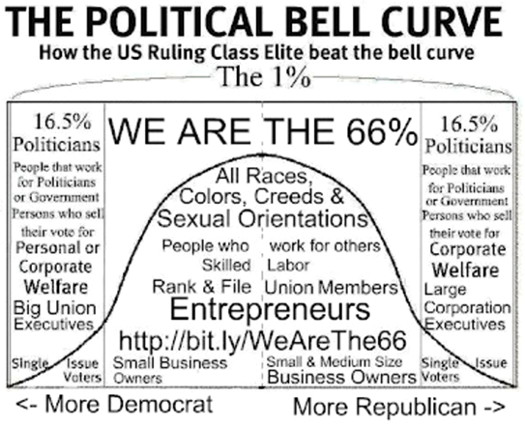 What does the Bell Curve have to do with Justice, you may ask, Barbed Wire Justice or any other kind?

Good question. To see the connection, look at the graphic above and notice which political demographic group stands out. Yes, there’s an overwhelming proportion of the population in one demographic group. So, of course we might expect that group to control the political agenda in the United States… Right?

In writing his article, Don Mashak asked, “How can the following events and acts be reconciled with belief that we live in a Constitutionally limited, Representative Republic with two separate and independent major political parties?”

Democrats, who are supposed to be the champions of middle and lower class America, vote to bail out businesses and their wealthy owners, 40 Democrats voted for the Emergency Economic Stabilization Act; View Breakdown;

Republicans are supposed to value the risk and reward Darwinism of the Free Market, yet voted to bailout failed business and business owners, 33 Republicans voted for the Emergency Economic Stabilization Act; View Breakdown;

Republicans and Democrats vote to take away WE THE PEOPLE’s right to a speedy trial and representation under the Bill of Rights with NDAA?

The American Judiciary and Legal system are systemically corrupt and yet the Democrat and Republican Parties actively cover up, aid and abet this systemic corruption.

Don Mashak logically came to question how these ironies & inconsistencies could possibly be explained within the U.S. belief in a political system where 2 independent and philosophically diametrically opposed political parties battle to represent the best interests of WE THE PEOPLE. “Based on its proportion of the population,” he wrote, “logically it should control the political agenda of our country. BUT IT DOES NOT. How is this possible? How did this happen?”

In America, at its “start up”, rulers could no longer order things without consideration of rights, the Rule of Law, Due Process. Understanding the Importance of Due Process ~ Read more.

Equally important there was now “freedom of religion” which vastly curbed the ability to bring the population to heal using religious dogma.

Suddenly the only tools left to the rulers in the United States, who were clearly in the minority, were their wealth, knowledge, censorship and propaganda. These were the only tools the minority had to control the majority, and thereby the political agenda of the country.

Steps Used to Control the Majority

1. Artificially divide the majority of the people. (2 major parties)

2. Pit the resulting “halves” of the population against each other by using propaganda to exacerbate, exaggerate and accentuate the differences between the 2 halves. (public school, religion, major media, campaign ads, false or exaggerated political party dogma)

At this point the minority of elites and would be rulers have decreased their disadvantage from something like 1% v 99% to 1% v 49.5%

3. The minority gain the loyalty of politicians of both parties by financing their campaigns and/or giving them thins.

4. The minority build a contingent of operatives, employees, loyalists and others willing to trade their votes favors and consideration.

5. The elected officials of both parties build up their own contingents of operatives, employees, loyalists and others who trade votes for favors and consideration.

To clarify how the polarizing issue of racism is used, Mashak recounts:

Lincoln, a Republican, freed the slaves. The KKK was closely affiliated with Southern Democrats. Democrats most actively opposed the Civil Rights movement. Yet the 1% today has you believe the Democrat Party best represents the interests of persons of color. If racism is a matter of principle and not of simple political expediency, how can it so easily drift from one party to another party? Perhaps racism today is kept alive because it benefits the ruling class elite in that it divides rank and file Americans.

To close the rest of the gap, the minority ruling class elite rely upon money, major media, propaganda, censorship, baser instincts and emotions as well as election fraud.

Propaganda? Yeah sure! But wait, let’s call it something more pleasant, like… public relations.

Back in 1928 Edward Bernays wrote,

“The conscious and intelligent manipulation of the organized habits and opinions of the masses is an important element in democratic society. Those who manipulate this unseen mechanism of society constitute an invisible government which is the true ruling power of our country.”

One of Edward Bernays’ original clients was Lucky Strike. For Lucky Strike cigarettes to increase its market share, it was important to have women become smokers, whereas previously smoking had been something only men did. Bernays was highly successful. Edward Bernays and the Art of Public Manipulation ~

By framing each election in a certain way, the ruling class elite essentially control the election dialogue and the results.

For example, in an election about jobs in a bad economy, bread winners who are having trouble supporting their families are likely to vote from a place of emotional despair.

With this in mind, the major media debates gloss over systemic government and judiciary corruption. For instance, were the media to focus on misallocation of resources that lowers our GDP (Gross Domestic Product) questioning among Americans would lead to less control of the election.

Similarly, the major media debates gloss over the damage being done to Americans by the  unconstitutional, privately owned Federal Reserve Bank. Were the media to mention the $25 billion dollars paid each year to the private owners of the Federal Reserve Bank Americans might question whether that amount left in their pockets would improve the economy and their lives.

Perhaps the most harmful public relations ploy of recent years is getting Americans to blame fellow Americans for “not paying their bills” as a cause of foreclosures that cratered our economy, rather than looking at the fraud perpetrated by big banks like Wells Fargo and Bank of America.

My personal experience on forums throughout the Internet made me wary of those Americans who styled themselves as Christians, yet under that banner attacked other Americans unmercifully in a way totally opposite anything Jesus Christ taught.

This was a particular win for the ruling minority for two reasons, first it took focus away from the widespread corruption and fraud of Banks like Wells Fargo and of Wall Street, and second, it actually impacted the health of victims of the fraud by putting addition stress on them. It is now known, you see, that stress has the effect of shortening our telomeres, which in turn results in a shorter length of life.

Stress Can Break You ~ Read more.

Divide and Conquer: Politics and the Left/Right Fraud ~ Watch video.

As an aside, the Pardigm, Left/Right Fraud videos were suggested to me by Chris Erion