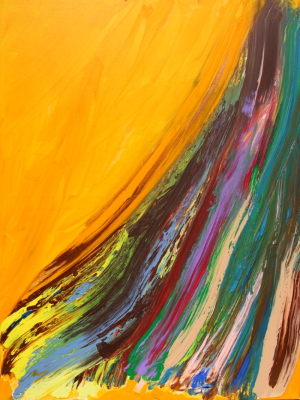 7/31/2014 ~ “Stream of consciousness” best describes this letter dealing with a miracle, a horrible loss, the sensitivity of legislators to the needs of spotted owls, rather than Americans, and how this U.S.News & World Report editor restored my ability to sleep by listening to me, asking questions, and not judging. That last was very powerful.

I’ve added blue headings to make it easier for you to find different parts of this letter.

I went to the post office yesterday evening and found your letter. I only go to the post office once a week now. Thank you for arranging money to cover my coming and going to Kinko’s. I appreciate it. I think U.S. News was right not to reimburse me for the overdraft charges. I wouldn’t have given the money to the bank, anyway, since the bank had recently taken almost all of three hundred dollars I’d gotten the insurance company to pay me for necessary repainting due to the leak last spring. Which money I was really going to use for the phone or car insurance or something. If I were going to make payments on my outstanding credit debt, I would have divided the money, equally, between all of the institutions to whom I owe money. Which is what I was doing before the miraculous leak.

Miraculous, because if there were one thing I would have opted to correct in this house, it would have been the poor water pressure. Only when I had money I could never work out how to correct it.

Then, when I came home from the Grand Canyon, where a bit of action prior to the end of my story takes place, I could hear water running. Which I tried to believe I didn’t really hear. When I could deny it no longer, I called the water company, who came and said yes, I had a half gallon a minute leak. Somewhere under the slab.

I had someone come in to dig where a puddle was forming outside, where he was sure the leak was, since there were bubbles rising to the top of the puddle. But when that hole had been enlarged, my sidewalk had been broken through, the cement of the front porch had given way to the growing hole, and the water wasn’t actually coming from the heating system in the wall, nor, after moving the water heater, was the leak there, the original hole was enlarged in the direction from which the water was flowing, the water taking with it what my house had previously been sitting on. Finally, a quintillion hours later, the leak was found between my kitchen and living room. The pipe had been bent like a straw when it had originally been laid. Less than two dollars worth of properly bent pipe corrected the problem. The damages, however, were in the thousands by this time.

The insurance man, Mr. Dark, seemed to take a dim view. But eventually came through with everything that was reasonable. And everything that I didn’t need to pay for work that had been done, I used to pay down my credit card bills. I had lived on my credit cards between commissions. So for months after that I was free of the calls from 800 numbers of people looking for their money.

Then my tenant left because of one of the other condo owner’s dog. And I discovered just what an impact our new mayor has had on tourism. Where I used to get ten people a day looking at the condo, I now am lucky to get one response to my ad a week. And then the New Mexican pulled my ad, but didn’t tell me … only when I called them to change the word Open to View, did they say they didn’t run ads for people who don’t have phones.

Feared a turn for the worse

Which brings me to today. I appreciated you saying, “I feared that things have taken a turn for the worse for you, financially.”

The thing is, I don’t think things “have taken a turn for the worse.” To me this situation was inevitable from the time IRS took all of my money last year, putting me on a downhill slope. When I wasn’t left enough to go on with my business, I could see I was also being left without a means of stopping my descent, should a descent begin. And, the chance of nothing going wrong in the very narrow eco-sphere I was left, so to speak, nothing starting me on the slide downhill, was unlikely in the extreme.

It was precisely this to which I objected. This and losing my property that was supposed to provide for me in my old age.

Legislators concerned for spotted owl survival, rather than that of people

And what I still don’t understand, is how legislators can understand that spotted owls need certain things to live, without at the same time understanding that IRS cannot clear cut a person’s habitat, if that person is expected to survive.

If smoking leads to cancer, do IRS levies lead to child abuse?

I’m meaning to write to David Kessler about this. I mean, I think IRS is as detrimental to health as are tobacco companies. At least if the figure that I read somewhere was correct: 2.3 million Americans were levied in a recent year by IRS. My point is that if smoking leads to lung cancer, via nicotine, then having all your money taken leads to child abuse, via stress. Etc.

After you listened to me I began sleeping again

Again, I am so thankful to you for calling me. It amazes me that from the time I explained this to you, and you listened, that I began sleeping again. Not sleeping for months is really painful. Three hours a night/day is not sleeping. Or at least not sleeping enough to avoid pain.

The phenomenon of being able to sleep after you listened to me, made me understand how different it is to just listen to someone, saying yes, asking questions that further understanding, but offering no advice. I have a friend who does co-counciling, and who had described this to me. Though she always offers advice. Mainly because she’s worried about me. And I do the same with her, since I want her to understand the birth mother’s perspective in adoption/foster situations. The child she was adopting is apparently actually going back to his birth mother now, and I had to tell Monica that if she didn’t know me, this would probably not be happening to her, since she thinks way more positive things about the birth mother than she would if she didn’t know me.

My son was given to someone else

My son, you see, in England, was given to someone else. Now, you’re thinking I’m a horrible mother. But the fact was that it was illegal for me to work there. The Home Office kept threatening to put me in prison for six months, fine me £500, and deport me for working. And only when I saw my dossier did I see all the letters from John, with whom I had been living, and who had told me he would give me half his income for a year if I got a job, so that I cried and cried, thinking I would never find such a remarkable and wonderful man again. Each time I told him about a job I got, he wrote the Home Office and turned me in for working illegally. Talk about creating a little crack in someone’s trust. (This is the story that editors there thought I should tell.)

Eventually I was crazy with the stress: this oriental man opened the door of a phone kiosk once, while I was talking to someone, and I began beating on him with my brolly till he left. I became terrified that I was going to hurt my son. I felt as if I was too close to the edge of control. So I put him in care. It goes on and on. My son was actually exceptionally nice and co-operative. Yes, I know all mothers think that. But many people contrasted him to their children since he did tend to say yes, rather than no. And things like, “I get it for you.”

I could not get my son back

The upshot was that social services gave him to someone who wanted another child. Gave away my son. Certainly without my permission. And I could not get him back after I moved here. In fact, once when I was going there to visit him, I was told that he wouldn’t be in London. Lucidly I’d had a dream to this effect prior to that phone conversation. I hired a lawyer, got my Unitarian minister to write a letter as well, and it was decided that he would be in London, after all. Then I brought him here, and his preparation for his visit was being instructed to hide his passport, so that I wouldn’t steal it. Too intense.

There are more examples of behaviour that I found highly destructive, but these give you the idea. Then the people he’d been given to decided they didn’t want him, after all. They’d already sent their son to a good school and my son to the local no-cost school and introduced my son to drugs: the man had been a back-up guitarist for major rock groups and thought there was nothing wrong with marijuana. Which there may not be in a secure environment. But it was not good for my son in that time and place, judging by the drug related choices he is making today.

Have get back to the story I’m writing

I have got to go back to my story. I am in the middle, literally, of a major edit/rewrite. And a quite good agency in New York has said they will read it. The last really good agency said it didn’t deliver fast enough, and wished me an agent with a pace similar to mine.

My forehead is incredibly furrowed, from thinking that if you hated this letter, then the agent thing may be more difficult than I think, even with the re-write and deletion of ten percent of the material.

Are you eating healthy things? Did you see the tomato thing reported on national news, in relation to prostate cancer: reducing its incidence by 40%?

I made yogurt last night, since the makings for six weeks cost what Yoplait, purchased at Sam’s Club, costs for a week.