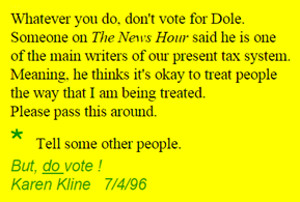 I made and gave out hundreds of these yellow cards during the 1996 Clinton-Dole campaign. I also carried voter registration forms which I gave to anyone who wasn’t yet registered.

Whenever I was in a line at the grocery store, Kinko’s, the post office or anyplace I talked to the people around me and gave them each a card. I hand wrote what’s shown in green type on this copy.

A Gallo brother gave $50,000 to Republicans, then asked Dole to change tax laws for heirs.Later a  Gallo brother died and the wine heirs saved millions.

1996 ~ The other day at Kinko’s a young woman with a baby said, “I worked for Dole in Washington. He’s a good family man, he never played around on his wife, and lots of them do.” I took back my card, telling her I was happy to hear that. I asked if maybe she would still talk to people about voting. I mentioned that someone on the News Hour had said the increase in minimum wage was not a political issue because people who earn minimum don’t vote, and therefore don’t elect anyone. But, I said, if more people were voting, I think laws would begin to favor children, where today they tend to favor big business. She agreed.

Erroneous IRS Levy Put me Out of Business ~ Read more.

2015 ~ Today, being older and wiser, I realize that my home is in foreclosure largely because Clinton repealed our banking regulations. Clinton made it possible for banks to bundle loans and bet on them on Wall Street.

Millions of Americans had their homes taken by banks that made Bundles, not just of mortgages, but of profits based on the removal of banking regulations.

Millions of Americans lost their jobs when the economy cratered as a result of bank bets gone bad.

So today, I don’t see Bill Clinton as some great president. I see him as a president who took advantage of my vote and the votes of millions of others, to legislate for banks and those like Warren Buffett who can capitalize.