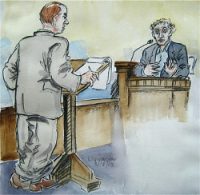 When I “lost” my Motion to Dismiss, that is, when it was denied, I was depressed. I felt as if I’d lost my home and garden. It took weeks for the realization to sink in that what had really happened was quite different.

I was mistaken about what constituted standing on the part of the bank, and that was depressing in itself. But, what I failed to appreciate in all my depression was that my motion to dismiss had to be denied because Wells Fargo said it had the original note, but lost it, which would entitle Wells Fargo to foreclose.

Just because in my experience Wells Fargo had repeatedly been dishonest and fraudulent: in qualifying me for HAMP loan modification, then reneging, in saying it served the Complaint for Foreclosure, which it was never able to show was true, etc. etc. does not mean the court could accept my version, not even on the basis of me showing these things. The court could not rule against Wells Fargo when Wells Fargo, via its lawyers, was continuing to say it did only the right things.

The decision to rule against Wells Fargo could be made only after trial and the examination of witnesses. Evidence is not, apparently, convincing to a court until it has been verified by a competent witness. I learned this when I was in Chapter 11 in bankruptcy court.

In my chapter 11 I had two claims against a particular creditor. One claim was for $16,000, the other was for $256. The larger claim was based on a loan and promissory note, each signed by me and the creditor. Per our signed agreement he was to ask me prior to doing any improvements. But, after he foreclosed and bought the property at auction, which was after I filed bankruptcy and the automatic stay was in place, he did $16,000 worth of improvements without abiding by our agreement. I had the receipts because I’d requested them in discovery. It was all so clear. I’d filed copies of the mortgage and note, as well as the receipts. It didn’t seem like I had to ask the creditor any questions about it, and I didn’t.

The $256 claim was not as clear. So, at trial I asked the creditor several questions relating to the $256.

When the Order on the trial arrived, I was awarded (or whatever the proper word is) the $256. My claim for the $16,000 was denied. I was shocked, How could that be when the documentation was so clear. The only difference between winning the little claim and losing the big one, was that I had not asked the creditor the same types of questions about the $16,000 and its documentation that I had asked about the $256.

Trusting that the documentation was enough, was my mistake. The fact is that I had to ask the creditor if the signature was his, if he recognized the document, if he knew what it meant, etc. When I failed to ask those simple questions, I failed to make my case and I lost the larger claim.

Motion to Dismiss for Lack of Standing ~ Read more.