No, it was not a GOP congress that forced Clinton to repeal Glass Steagall. Our banking regulations ~ that kept our economy and that of the world safe from greed ~ were repealed by Clinton and Democrats in Congress, their participation and help made repeal possible.

What Glass Steagall repeal did

Named after three Republicans, the Gramm–Leach–Bliley Act (Financial Services Modernization Act of 1999) is an act of the 106th United States Congress (1999–2001). Its passage removed barriers provided by the Glass Steagall Act of 1933 that had prohibited any one institution from acting as any combination of investment bank, commercial bank, and insurance company.

Upon passage of Gramm–Leach–Bliley, with its repeal of critical Glass Steagall banking regulations, commercial banks, investment banks, securities firms, and insurance companies were allowed to consolidate.

Additionally, Gramm-Leach-Bliley did not give the SEC or any other financial regulatory agency authority to regulate investment bank holding companies.

The legislation was signed into law by President Bill Clinton.

In 1998, the year prior to repeal of Glass Steagall, Citicorp, a commercial bank holding company, merged with the insurance company Travelers Group to form the conglomerate Citigroup, a corporation combining banking, securities and insurance services under a house of brands that included Citibank, Smith Barney, Primerica, and Travelers. This merger was a violation of Glass–Steagall and the Bank Holding Company Act of 1956, but the Federal Reserve, under Alan Greenspan, gave Citigroup a temporary waiver in September 1998.

Less than a year later, The Gramm-Leach-Bliley Act was passed to legalize these types of mergers on a permanent basis. The Gramm-Leach-Bliley Act repealed Glass–Steagall’s conflict of interest prohibitions “against simultaneous service by any officer, director, or employee of a securities firm as an officer, director, or employee of any member bank”. 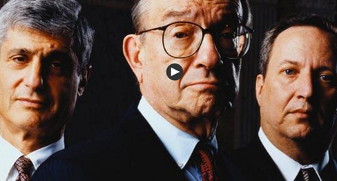 Front Line’s The Warning shows how the Clinton Administration had a clear warning of financial collapse resulting from policies it was pushing. You’d think the Clinton Admin would have paid heed and worked to safeguard our economy, but instead it worked for greater Wall Street profits.

One of the most startling parts of the documentary, for me, was Alan Greenspan’s fervent love of Ayn Rand’s thinking and writing. Most shocking to me was that when asked if he was against fraud by Wall Street, he replied, “No.”

I voted for Clinton

Just to be clear, I voted for Bill Clinton. U.S. News & World Report included my vote choice in a story they ran on IRS abuse of taxpayers. Read more.

Final vote of the Senate

No matter how Democrat senators voted, repeal would have passed on the basis of the Republican votes.

Which senators voted to repeal Glass Steagall ~ View government tracking of the vote.

Final vote of House of Representatives

The story in the House of Representatives is very different. 154 Democrat votes made the difference.

154 Democrats voted Yea, making it possible to meet the simple majority requirement. Had these Democrats voted Nay, 362-154=208, and instead added their votes to the Nay column 57+154=211, the result would have been 208 in favor versus 211 opposing and the bill would not have passed.

Which representatives voted to repeal Glass Steagall ~ View government tracking of the vote.

“All Legislative Powers herein granted shall be vested in a Congress of the United States, which shall consist of a Senate and House of Representatives.”

(Article I, Section 1, of the United States Constitution)

Bill Clinton and his administration allowed banks to manipulate the stock market beginning in 1999. I like this video for its clarity.

Jeffrey Steinberg is interviewed on processes which directly motivated the takedown of one of FDR’s most important acts to safeguard the United States economy from hostile, foreign and colluding, traitorous elements. This safeguard is, the Wall-Street feared Glass-Steagall Act, which enforced a strict separation of commercial and investment banking. Experience has shown this legislation was essential to a healthy economy, contrary to what the lies and propaganda efforts disseminated up to its 1999 repeal imply.

Democrats Argue GOP Did it

Democrats appear incapable of looking at what Clinton and 154 Democrat representatives in the House of Representatives did. Not all Democrats, of course. Some Democrats can and do look at the facts. But overwhelmingly they argue that anything bad was done by the GOP. My feeling is that this failure to insist on accountability is the downfall of our government, not the Kochs.

In a tedious Twitter exchange I was given this link to PROVE Clinton did not repeal Glass Steagall: View page.

You can see that the page begins by clearly saying Clinton did not repeal Glass Steagall. Which leaves me scratching my head. “Is a president responsible for legislation he signs?” I asked Google.

The President of the United States is commonly referred to as the most powerful person in the free world, but his legislative powers are strictly defined by the Constitution and by a system of checks and balances among the executive, legislative and judicial branches of the government.

Approving Legislation
Although it is the responsibility of Congress to introduce and pass legislation, it is the president’s duty to either approve those bills or reject them. Once the president signs a bill into law, it goes immediately into effect unless there is another effective date noted. Only the Supreme Court may remove the law, by declaring it unconstitutional.

Vetoing Legislation
The president may also veto a specific bill, which Congress can override with a two-thirds majority of the number of members present in both the Senate and the House when the override vote is taken. Whichever chamber of Congress originated the bill may also rewrite the legislation after the veto and send it back to the president for approval.

The president has a third option, which is to do nothing. In this case, two things can happen. If Congress is in session at any point within a period of 10 business days after the president receives the bill, it automatically becomes law. If Congress does not convene within 10 days, the bill dies and Congress cannot override it. This is known as a pocket veto. Read more.

Clearly, Clinton did not veto. Clinton did sign. So, Clinton is, in the end, responsible for repealing Glass Steagall.