4/23/2018 ~ I was put in Twitter Jail for comparing Israel killing Palestinians to the school shooter on Valentine’s Day. Valentine’s Day had long since passed when my jail sentence of a week was imposed.

I appealed twice, to no avail. Followers told me that the appeals aren’t even looked at. I can believe that.

By the end of the week I had begun to think that if I began tweeting again after I was let out of jail, I would be effectively saying that it was all right for Twitter to silence me for a week because I am critical of Israel’s apartheid, not to mention the basic occupation and constant killings.

I could DM while I was in Twitter jail. I continue to DM.

I miss my friends and the news that they tweeted, which was way off the CNN/NBC  chart of acceptable topics and issues.

I am horrified, nearly daily, at the behavior of Jews in Israel. It is beyond my comprehension that they can behave in such a horrific way toward Palestinians when they should know better, given the history they so often bring up in their everlasting search for sympathy.

4/16/2018 ~ Yesterday two people on Twitter sent me Direct Messages about this page, which they had clearly seen. See their messages below. My stats for this page showed two visits. Today the two visits have disappeared from my stats. And, a weird thing happened yesterday when I was sending the link to this page in Direct Messages: I got a Twitter message at one point saying that I could not tweet the Tweet they had put me in Twitter Jail for… the message from Twitter had the tweet in it. My Direct Message did not have the tweet in it. So, it appears the surveillance technology is sophisticated… As if we hadn’t guessed.

The week of being locked out is over, but I question whether it is moral for me to tweet if that is tacit approval of Twitter supporting Israel and it’s inhuman policy of killing Palestinians for their land, not to mention destroying their olive groves and homes.

1967 was the first year that violently uprooting olive trees was used as an Israeli method of land acquisition. Since 1967, 800,000 olive trees have been uprooted. Read more.

“The month of June (2015) alone witnessed one of the largest uprooting operations in the southern West Bank in years, with Israeli military tractors destroying thousands of olive trees belonging to local farmers. In the first five months of this year, the UN recorded the uprooting or vandalising of around 8,841 trees by Israeli settlers.” (Shiraz)

Hello,We’re writing to let you know that your account features will remain locked or limited for the allotted time due to violations of the Twitter Rules, specifically our hateful conduct policy.We do not allow people to promote violence against or directly attack or threaten other people on the basis of race, ethnicity, national origin, sexual orientation, gender, gender identity, religious affiliation, age, disability, or disease.Please note that continued abusive behavior may lead to the suspension of your account. To avoid having your account suspended, please only post content that abides by the Twitter Rules: https://twitter.com/rules#hateful-conduct.You can learn more about our policy against hateful conduct here: https://help.twitter.com/rules-and-policies/hateful-conduct-policy.Thanks,Twitter

Below is the tweet that I had to delete in order to begin counting down the week.

Below is my third appeal …

4/15/2018 ~ I am appealing once again because it is hateful of Twitter to restrict my tweeting because I compared Israelis shooting innocent Palestinians to a school shooter. It is unjust for Twitter to protect Israel from criticism of their horrific killings of Palestinians, to include children.

If Twitter is prejudiced so deeply against Palestinians, and so prejudiced in favor of Israel, it would be a violation of my morals to use Twitter innocently as I did in the past.

If Twitter is so deeply prejudiced against Palestinians, then if I continue to use Twitter I will be tacitly agreeing with that prejudice.

I truly hope that Twitter will reconsider its decision to make me delete my Tweet that compared Israel shooting Palestinians to the school shooter who had been identified that day, Valentine’s Day, as the Florida school shooter.

I would like to be able to tweet again. But I cannot justify an immoral position just because I like tweeting about the mocking bird, The Mouse, Foreclosure Awareness and other things.

Please reconsider and allow me to re-establish the tweet Twitter had me delete, and which I did delete before I gave the situation serious thought.

Some of my Twitter Friends Responded to this page… 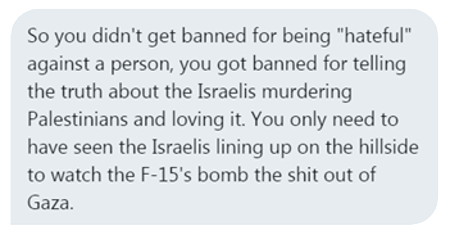