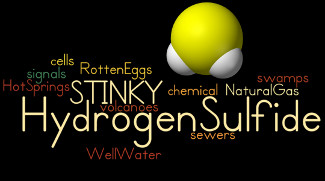 The environmental report below shows hydrogen sulfide in areas in my condo.

My notes kept while living in this small amount of hydrogen sulfide show how greatly it affected my health.

NOTE – 7/2/2018 – I just realized that the environmental report on my site is not the one I paid for and had done. I think my site was hacked. I know that sounds outlandish, but the reason I can’t walk today if because of the hydrogen sulfide. I described on my site exactly what happened, what Michael Curtis said. He came and did the tests BEFORE I had the pit excavated. If he came and did additional tests while I was living in the motel because the pit was under my bedroom and the brick floor over it was unsupported, I was not told. I totally trusted him. So I didn’t look critically at what was on my site until today when I was comparing what levels of hydrogen sulfide have been considered safe.

I wrote to a friend on Twitter, via DM…

I did a page on the outhouse pit under my condo very early on. I have a description of the air quality guy coming and doing tests. He told me to have it excavated… but now the report on my site is from after that. I really think my site was hacked… years ago

I remember running into him at a store. I was all happy to see him, the air quality guy, and he was acting all jittery, no eye contact, as if I carried the plague or something…

I have the report on my site, but I’m sure it’s not the report I believed I put there…

Well, I just wanted someone to talk to about these insidious things… 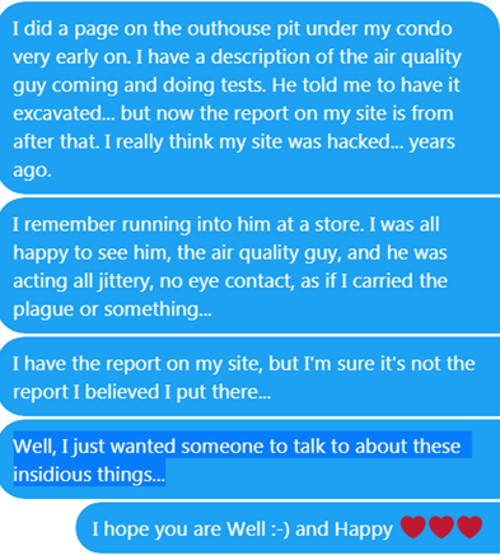 I wrote, “The amount of hydrogen sulfide in my condo was .6 ppm, an amount equal to that which was said at the time to be safe in working environments. The limit was then raised to 10 ppm. However, that must have proven severely damaging because in 2011 the limits were significantly reduced to 1ppm in an 8 hour period.”

Taking note of the great impact on my health of a very small amount of hydrogen sulfide is important because the testing equipment used to test air in many working environments is not calibrated low enough to catch such small amounts. The result of calibration aimed at catching only higher amounts of hydrogen sulfide is that people working in those environments which are known to contain hydrogen sulfide are told they are safe when in fact their daily exposure may well be similar in their 8 hours of work to that which had very damaging effects on my health.

Admittedly I was in the hydrogen sulfide 24/7, which is three times more exposure than there would be for someone working an 8 hour shift.

For me, the more I fell the less I left my condo. The more I fell, the less I walked at all because of the tremendous insecurity I felt when I was on my feet. I went to the store where I could hold on to a cart to walk, and I went to the casino because that’s mainly sitting — and the interesting thing was that when I was driving home from the casino I always felt so much better than I had been feeling, which I attributed to a sense of having won. I always felt as if I had won. In reality I think I felt so good because I had been out of the hydrogen sulfide.

What Environments Put You at Risk?

If you work in or live near a sewage treatment plant, oil and gas drilling and refining; if you have ignored a missing cap on your sewer pipe clean-out; or, if you have allowed water in an unused sink trap to evaporate away, there can be low levels of hydrogen sulfide that may be affecting your health at different points, but primarily your nervous system, breathing, and soft tissue.

Steps to Take if You Are at Risk

If you have a missing cleanout cap, replace it; run water in your unused sinks and showers to fill the traps so that sewer gas can’t come into your home.

If you live in an area of oil and gas drilling, or you work in a sewage treatment plant, then it would be good to have at least two Epsom salts soaks a week. Epsom salts will remove some of the toxin and it will reduce swelling, even the swelling that is internal where you can’t see it, but nevertheless feel it.

What has helped me most is Methylcobalamin, the active form of vitamin B12. It has helped me recover a great deal of the feeling I had lost, and while I still bump into walls and lose my balance and fall, I am a lot better than I was.

Methylcobalamin regenerates nerves and helps with memory recovery. I find it extremely hopeful that Methylcobalamin has helped me recover as much as it has. I am not entirely fine, but I am quite a lot better. And, that makes me think I can regain even more health.

Environmental Report for my condo

Document removed because it was not a copy of the report I paid for which was done before there was any excavation.