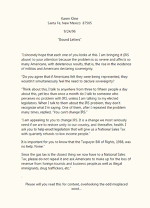 9/26/2016 ~ When I was fighting IRS, fully believing that I could play a part in reforming IRS, a woman who led a woman’s group told me that I should not use my energy and my life that way, that instead I should focus on the joyful part of life.

But now, when I look back and see the price I’ve paid, I often remember that woman’s warning.

My statistician cousin, Bill Golomski, had told me I would be better off just paying whatever IRS said.

Yet, as I look over my letters written in the nineties, I see that I saw then the problems that have only gotten worse: Media refusing to cover issues that go counter to the chosen direction of government, Legislators in Congress not listening to, nor representing, the voters who put them there, and Immigrants being blamed when in fact the underlying problems are caused by government.

In many of my letters I wrote that when my property was foreclosed or I ran out of money I would kill myself in protest of Abuse by IRS. When in fact my condo was foreclosed and the sale was set for the following Monday, I was firm in my resolve.

That Friday, however, a man came to my house who wanted to buy my condo. I said I couldn’t sell it to him because I was protesting IRS abuse and I was going to kill myself because the IRS had caused my condo to go into foreclosure by putting me out of business enforcing for 1984 despite the fact I’d paid it in 1985.

He was of East Indian descent, and spoke in a “whirled peas” accent. He said it was against his religion for him to let me do that, so, he said, he would tell me how I could stop it. “You must file bankruptcy,” he said. “After you file bankruptcy they will not be able to sell your condo.”

Blink. Blink. I had not ever heard about that. I’d found a lawyer at one point who said she’d do my foreclosure pro bono, and she hadn’t mentioned bankruptcy. She had also said she wouldn’t do my counterclaim, that all she would do was the foreclosure… which sounded to me as if she was effectively going to make foreclosing easier for the bank lawyer. So, I’d given her a miss and gone to the law library where, when the librarian showed me a wall of books dealing with the law and statutes involved, I was so drastically taken aback that he said, “You’ve got to keep breathing.”

In any case, I went to a man who I’d thought was a friend, but alas was really a fraudster, and asked him to take me to Albuquerque to file bankruptcy, I didn’t have my car registered for want of money at the time. He took me to the office supply store where I was able to buy a bankruptcy kit, but he wouldn’t take me to Albuquerque.

After reading the directions in the bankruptcy kit I chose to file Chapter 11 because I had three properties and reorganizing seemed possible if I just had some time. Chapter 11 offered the most time.

It was after midnight when I finished filling in the forms. I flipped a coin to see if I should really kill myself and to my surprise the result was, “yes.” So I took a bath, put on fresh clothes, and took the 120 “last letters” I had been writing and saving for this moment, as well as the bankruptcy papers and drove to the mailbox near a strip mall where I posted about half the letters, then drove to another box to post the rest. Finally, I put the bankruptcy papers on the doorstep of the man I’d thought was a friend, and asked him to file them in Albuquerque for me.

I went back home, had a last meal of my favorite goat cheese and tortillas, with a cup of coffee with Grand Marnier in it and whipped cream on top, and took 60 Dalmane sleeping tablets. Then, with a small bottle of frankincense essence to smell good, in case carbon monoxide smelled bad, I got into my car with the exhaust funneled in via my vacuum hose.

I don’t remember a neighbor finding me, or the EMTs, the ambulance or the ER. I woke up about a day later. Shortly thereafter I was taken to the psych ward where I remained until a few days later I was drawing my pet turtle in art therapy class when police came, handcuffed me and took me to jail because shrubs in my front lawn were too tall. Read more.

The good thing was that the ER did a B12 test which showed that I had a “profound” B12 deficiency. If not for that I would not have recovered over the years as much of my health as I have. The bad thing was that a copy of the last letter I’d taped to my door had been pinned to me when I was brought in to the ER. Because my letter talked about what IRS had done to me, I was labeled “paranoid”.

Years later when I went to the ER because I was having symptoms of tetanus, the ER reviewed its records and decided I was … paranoid. One doctor even said that trying to kill myself with something like a rusted nail was a bad idea. So, my tetanus went largely untreated until my home was foreclosed, by now I was living in my townhome, and I was able to go to the doctor for the homeless, who prescribed enough Metronidazol to kill the tetanus.

Similarly, but different, one day at the bankruptcy court when a particular pleading that I’d filed regarding the IRS could not be found I said that if things that were supposed to protect me continued to fail me there was likely going to be a time when I would kill myself. The religiously oriented Hispanic clerk went to her superior and had law enforcement called. When I went out of the office into the wide hallway of the old bankruptcy court building the hallway was filled with cops with guns.

I was taken to the UNM psych ward were I was eventually shot up with Haldol. The woman in charge was an obese black woman who recorded my recent, hard won weight loss as a symptom of severe depression. In the hearing on whether or not they would shoot me up with Haldol against my will, she said the Haldol would improve my thinking. When I objected saying that my thinking was crucial to my writing, she said that the Haldol would improve my writing.

In an interview in her office I explained about my fight against IRS. I told her about the U.S.News & World Report article. She got a copy of the magazine and she and her co-workers decided that the I’d fond the article and come to believe the person in the article was me.

When I couldn’t sleep because of nasal drainage and asked for vitamin A which had always made it go away, I was told that vitamin A was too dangerous. This from people who thereafter shot me up with Haldol which was known to be fatal for some people, and which had a known side effect in some people of irreversible dyskinesia — shaking like in Parkinson’s Disease. It is known that Haldol damages the brain’s motor functions.

The immediate effect was to make me shuffle rather than walk, and it made my eyesight blurry.

Here is a quote from the 2012 edition of Virtual Mentor, the American Medical Association Journal of Ethics. It concerns a pharmaceutical ad that ran in the May 1974 issue of the Archives of General Psychiatry:

“…in the ad, an angry African American man shakes his fist menacingly…the text above the image…’Assaultive and belligerent’ ‘Cooperation often begins with Haldol.’”

As recently as 2008, Haldol was used in the United States on immigrants who were being deported.

“There are multiple reports from Soviet dissidents, including medical staff, on the use of haloperidol in the Soviet Union for punitive purposes or simply to break the prisoners’ will. Notable dissidents that were administered haloperidol as part of their court ordered treatment were Sergei Kovalev and Leonid Plyushch…

In his landmark book, Toxic Psychiatry, Dr. Peter Breggin quotes Leonid Plyushch, a scientist and political dissenter in the USSR, who escaped to the US: “[In a Soviet prison, after dosing with a small amount of Haldol] I was horrified to see how I deteriorated intellectually, morally and emotionally from day to day. My interest in political problems quickly disappeared, then my interest in scientific problems, and then my interest in my wife.” Read more.

I was spared further injections when the letter written to my by Princess Diana’s secretary, with Princess Diana’s seal on the envelope was brought in and everything the psych ward people thought had to be rethought. I was released.

But, in fact I could no longer think in the complex way that had allowed me to write the letters shown in Bound Letters. It was as if there was a partition in my brain that kept me from getting to thoughts I knew were there. And, when I watched Charlie Rose or other news magazines, I no longer had a letter come to mind, instead I’d think, “that’s bad.” That’s all there was left of the rich mind, full of ideas, that I had had.

I think, given the years since the Haldol injection, that in fact the Haldol changed my brain, possibly because I had a particularly low level of vitamin B12 at the time. Perhaps had my B12 level been high, it would have protected my brain.

UNM’s psych ward people had seen my low B12 level, which was as low as possible without being a profound deficiency, and said it was low normal.

So, that part of me which was most dear to me, my thinking, was taken away because I protested IRS abuse of taxpayers.

Letters to and from Princess Diana. Read more.